Ben “metalqueersolid” Rogan was late for the interview (with good reason), which gave me some time to scout out somewhere that served brunch with mimosas. “Let me be a basic bitch” were the instructions I had been tasked with as part of the interview rider. For me, this meant learning what a mimosa was as well as where to get one in Newcastle on a bank holiday. Newcastle, for anyone from further afield, is one of Europe’s party capitals, particularly for stag and hen (bachelor/bachelorette) parties. As a result, weekday state-given holidays tend to turn the city into a one of the world’s biggest street parties, where mimosas and sandwiches are off the menu.

He was late due to an “emergency”, which turned out to be that his beloved coffee machine had broken down. “Coffee buff” actually appears on his Twitter bio ahead of “for business enquiries”, so this was an urgent matter. When he recounts this at the bar later, he will spiral into a caffeine frenzy.

When MQS finally arrived, dressed in possibly the only existing set of avant-garde orthodox temple-wear, it turned out I wasn’t the only person coming to town to meet him. Someone had left their controller at the recent NFC2A event, Newcastle Fight Club’s first foray into an all-anime meetup. As one of the main organisers of NFC2A, Ben had taken it upon himself to make sure it returned to its rightful owner.

While waiting for the Anime/Smasher to arrive, we discussed a few Newcastle Fight Club matters; the upcoming Tekken 7 Tournament has picked up enough traction to become a Tekken World Tour dojo event, which is a big deal for the whole FGC up here, not just the 3D community. We also talked excitedly about The Mixup in Lyon, particularly the successes of Kilzyou, Akainu and his F.A.N.G. ally, Vegapatch.

“He plays a very different game to me.”

Despite Ben’s own aversions to playing anything Smash related, he was able to talk to the owner of the controller, when he arrived. They talked about the franchise in depth, complete with Smash in-jokes and even a bit of hardware knowledge. Alongside being the UK’s representative at the OCGoodwill Invitational and a twice-sponsored SFV player, MQS is one of the main T.O.’s in the North of England for a multitude of locals (NFC2D, NFC3D, NFC2A and assisting in local University esports events), a regional event (WellPlayd), and also competes in many other games, from Tekken 7 to Third Strike to Vampire Savior. He tends to be able to find common ground with other members of the FGC with ease, regardless of their tastes.

MQS has been a part of the furniture in the UK FGC for quite some time. He’s known for running/attending tournaments, placing well and even nabbing a few international scalps along the way. If you’re not turning up to tournies or talking shit in the F.A.N.G. discord, you’ll likely know him best as “the man with the book” in the Gfinity Elite series. He signed for Hashtag in seasons 3 and 4 and earned a reputation for putting in serious recon work for his team when he wasn’t playing. Players like Reneil “JoKeR JoKeZ” Landell even accrediting some of his character selections to the prep and analytics that he’d been gifted from “the book” ahead of his matches. If you come up against one of Ben’s team-mates in the Elite Series or on the Capcom Pro Tour, it’s best to assume your smurfs and tendencies have been compromised.

Before Ben arrived I’d managed to find a bar on Dean Street – somewhere that would avoid the party crowds and also cater to Ben’s taste for class/need to express his basic bitchness. Dean Street, which leads down to Newcastle’s riverside, used to be the gateway to one of the rougher parts of town, but as the city continues to cement itself as a huge technology hub, money has continued to flow into the Quay, which has helped MQS in his non-FGC life as an InfoSec professional. This part of the city sees technologists from all over the world all week long and is no stranger to letting people into its fancier bars without prejudice, whether they’re in suits (Ben) or baggies (me). It’s like a tiny silicon valley where even the shabbiest dressers like myself could potentially be a secret start-up millionaire in disguise…so long as I keep my mouth shut.

Even during passover, it’s not always easy to find Kosher food in Newcastle, but Ben managed to coerce a breakfast item onto their lunch menu to go with his champagne and OJ, while I sacrilegiously dismantled a sauced-up steak sandwich across the table.

“I don’t like to be a pain and ask for too many substitutions, but it’s not always easy in Newcastle.”

This had equally been a big part of his preparation for LA, where he competed in the OC Goodwill Invitational as the only UK player. Visas and passports are one thing, but it was important that he also found places to properly observe the Jewish holiday, Passover while he was in LA, as well as scoping out places to eat and practice.

When it came to talking about tournament specific prep, “the man with the book” didn’t want to give away too many of his trade secrets, but he was extremely thankful for the time he’d had with Evo champ, Problem X at WinnerStaysOn Sessions earlier that week.

“I played a lot of sets with him, against a bunch of his characters. He covers a lot of the matchups I’ll be playing against.”

The OC Goodwill Invitational featured 5 invitees (Phenom, Punk, Gachikun, Bigbird, Mena), 6 community voted players (Commander Jesse, LPN, Gunfight, Somniac, MQS, Linkexelo) and a TBD qualifier from a last-chance tournament ahead of the invitational. The invited players will face off in four, 3-player round-robin pools before fighting for their stake in the $10,000 prize.

Invitationals are a little rare in the FGC and tend to inherit a lot of esports-isms. However, since this one was coming from Goodwill of OC, with the assistance of Levelup Live and 2GG, it had a lot of consideration towards traditional fighting game preferences, such as the aforementioned open-entry phase for competitors.

That open factor has allowed the FGC to propel a bunch of more locally celebrated players into the the global spotlight, although that factor brought its own stresses.

“Don’t get me started…I ain’t gonna comment on where people’s money came from, but a lot went into it.”

From speaking with other successful and unsuccessful contenders in the OC Goodwill run, this “stress” element has been consistent when trying to get nominated for the tournament. A lot of players have had their friends, families and even their own pockets to thank for a lot of their votes, as pledges for community players were made by charitable donations to Goodwill of Orange County. Players had their whole communities behind them to help them cross the line, so there’d been a huge amount of pressure throughout the selection process. Ben put his pride on the line in his own way to pick up votes, ranging from eating “a whole bulb of garlic like an apple” to publishing F.A.N.G. and anti-F.A.N.G. guides as voting incentives, which will likely surrender some of his own precious secrets.

“It was very stressful. That Tuesday, when the voting was all over, I’ve never slept so soundly.”

At the time of writing, Ben was one of the only remaining unsigned players going into the invitational, besides LPN and Gunfight. On the day of the interview, he’d put out an appeal for sponsorship, which has lead to him being the latest signing for Reason.

“Getting sponsored in the FGC, it’s not just about getting consistent results, otherwise you’d see a bunch of Guilty Gear players everywhere. Like, in traditional esports, where you can pick up someone that’s good online and make them better…that doesn’t work here. If you’re a team… you’re not just going to pick up Iwate and drop him off at a tournament. I don’t think it’s a very replicable model…I think that’s why fighting game players have some of the best stage presence in esports. They’ve always been at tournaments.”

As much as he holds onto some dread for the EUFGC under the current Gfinity-less state of suspense, MQS is confident that the FGC holds strong offerings for sponsors and that the Capcom Pro Tour is one of the things that’s working in our favour, in terms of nurturing a professional competitive scene.

“To be fair, if you’re just staying in Europe and you win even one ranking, one premier, you’ve covered your entire travel costs for the year.”

By this point the pancakes had been demolished and another round of mimosas was on its way over, MQS focusing more on the event itself and the plans he’d been making with the rest of the OC Goodwill competitors.

“Everyone else is manic about seeing the Avengers screening in that group…it’s not really my thing…I feel like I’m isolating myself more. I get in on the Wednesday, that’s the thing…I could enter WNF. I’m going along anyway. I need to pick up some Gamerfingers…I want to say hi to some of the guys out there.”

MQS seemed to be much more focused on the event as a whole, rather than on the competition or the prize money. It was clear that there was more going on with the event than a straightforward invitational. He planned to jump into as many opportunities as he could while he was out there.

“We have exhibitions beforehand. Jenga vs the smashers. There’s Valle vs the world in a bunch of old games. Me and Gunfight have to play him on Third Strike. Some people are going to be playing him on Super Turbo.

There’s a Phenom-Gachikun exhibition, there’s a Mena vs Bigbird Exhibition. There’s a mystery game which I might be commentating. That’s going to be fun. There’s a reverse competition which I immediately opted out of…I ain’t playing Smash!”

One of the exhibitions that he’s missing from, however, is the fashion show. This is often a hot topic in the FGC and has been as much among the OC Goodwill competitors already. 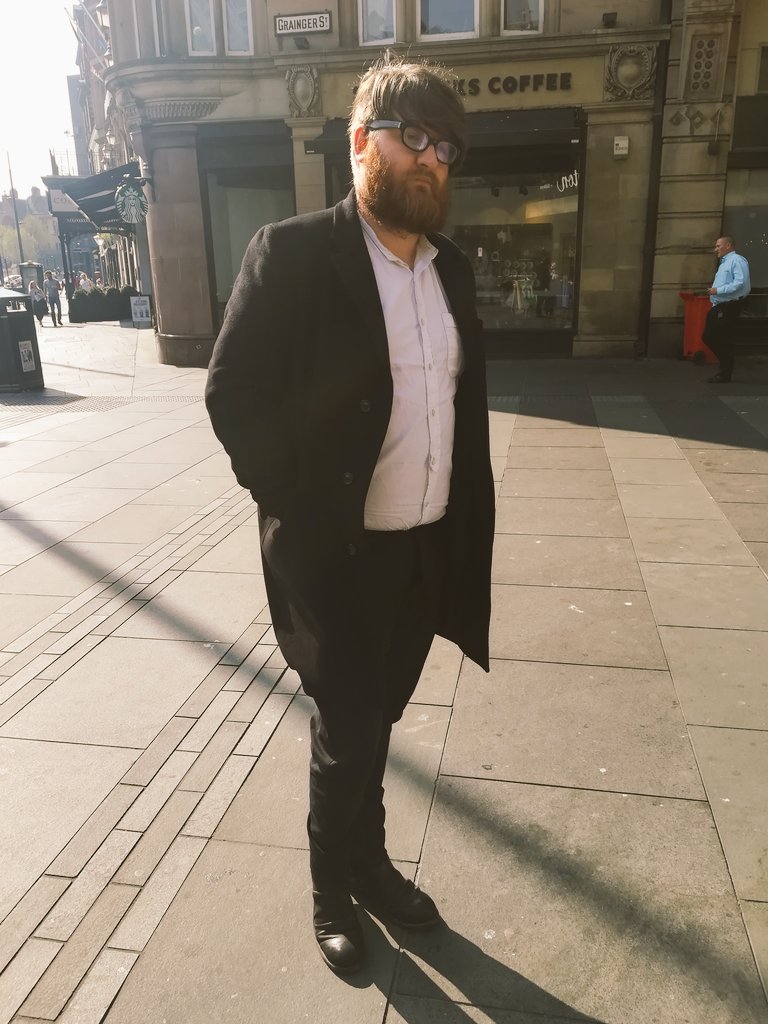 This isn’t the first time MQS has gotten heated about what to wear in the FGC and he turned to a moment Gfinity season 4 where he hijacked a team interview to settle who was the best dressed in Hashtag United.

“It ended up as a shouting match between me and JeSTeR [PoWeR] over who was the best dresser!”

That said, he hasn’t shied away from some of the F.A.N.G. jokes, recently rocking a signature “2” jersey at WinnerStaysOn.

“I don’t wanna be that kinda meme, I wanna be a good meme.”