Our League of Legends team has been invited back to the second FACEIT Challenger Invitational, which features 7 more top EU challenger teams to battle it out for a slice of the $1500 Prize purse. 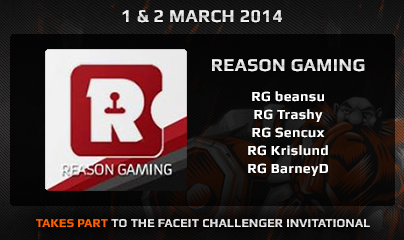 The Quarter Finals start on Saturday, March 1st at 10:30 a.m. CET, where Reason Gaming will take on the recently acquired SK Gaming Prime (formerly Team Kappa Prime), and the rest of the brackets are below.

The games will be streamed on FACEIT’s twitch.tv channel, cast by James “Stress” O’Leary and Vince “Metuz” Hill. Can’t catch the games? Stay up to date on our twitter and facebook pages!