Our League of Legends team recently started it’s journey through the brackets of the LCS Expansion Tournament, and have recently played their first game. Before placement in the bracket we had to play a BO1 vs Gamers2 to determine our places, as both teams were tied in points from the 2014 Challenger Series. Unfortunately we lost this match and were placed in the bracket against SK Gaming Prime, the team formerly known as Unlucky Bois.

This Best of 3 was played last week, and scheduled to be broadcast on the 22/11/14, but technical issues meant that these games were only shown to the public today.

If you haven’t seen the results, and wish to watch the games, follow the links and read no further!

SPOILERS FROM HERE ON!

Unfortunately the first game was a wash from SK Gaming Prime as they won all over the map and pushed their advantages hard to snowball the game out of RG’s control quickly. Luckily the experience of our veteran players allowed them to bounce back in Game 2, and although it was a struggle we managed to pull the win after a tumultuous game of back and forth plays. Game 3 was a beast of a different nature as Takefun went completely hard carry mode on LeBlanc ending with a score of 16/3/5 on the assassin champion and completely keeping SKP’s Midlaner GodBro out of the game allowing for a solid win for RG to take the series. 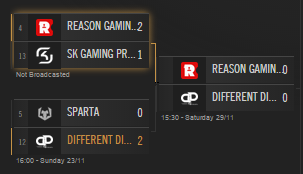 Now our roster will face EUNE team Different Dimension on Saturday the 29th at 3.30 GMT in the final round of the Online portion of the tournament, with the rest of the Expansion Tournament being played offline at IEM Cologne!

kauP with 10 match winstreak at EAS

rytme: My Return to CS:S