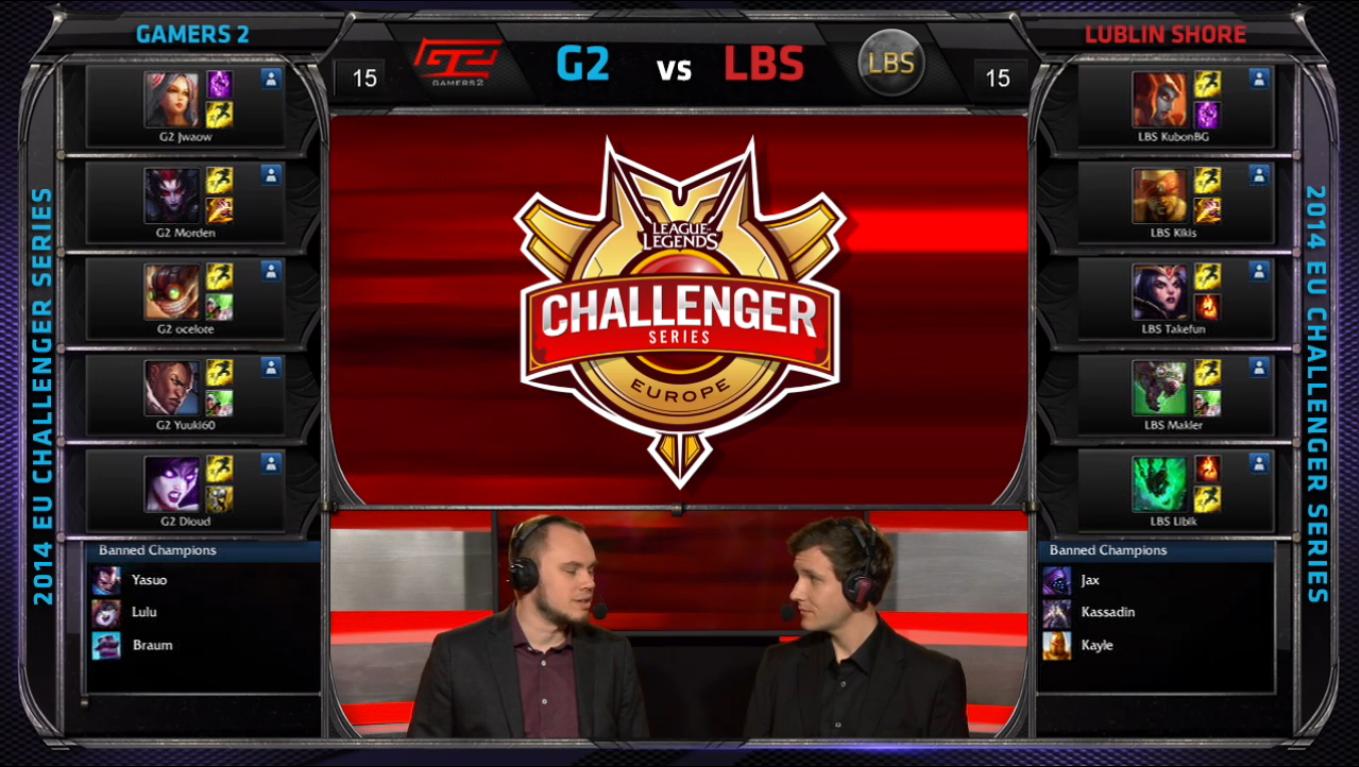 This first game starts slowly, with standard lanes being left to farm for the first 8 minutes, before the game is shaken up with a dive between the 2 Midlane turrets from Reason Gaming backfires and they give first blood over to Morden, though the do manage to pick up a return kill.

Kubon and Jwaow duke it out in the top lane and Kubons Shyvana wins the duel. Over in the dragon pit, after some connection issues, Gamers 2 pick up 2 kills in exchange for only losing Morden, but they are too low to attempt a Dragon. With a goal of keeping Irelia from getting out of hand, Kikis ganks the top lane giving Kubon another kill, but G2 see him in the top lane and Morden initiates onto RG’s bot lane, achieving a kill onto Libik and the first turret of the game.

With a nicley orchestrated teamfight, Gamers2 take down Takefun after attempts to make a pick in their jungle, which boosts G2’s gold advantage to a cool 4k.

Reason Gaming are trying to make plays across the map, but Gamers2 are catching them at every move and winning the small skirmishes and laying wards all over Reason Gaming’s jungle.

Gamers 2 take another dragon but are unable to push down any of RG’s turrets, so a change of pace allows Reason to play safe and try and close some of the gold disparity. When G2 attempt their third dragon of the game, Reason Gaming realise they have to contest, but they lose the fight and the dragon with a perfect smite from Morden to secure the objective for G2.

Gamers 2 bait RG into a fight behind the baron pit, which works on Takefun. Feeling safe to commit, G2 start the baron, and although they are interrupted by RG they win another teamfight 3 for 0 and turn back to the Baron. The remaining 2 members of Reason Gaming charge back into the pit at the last second, and Takefun manages to score a triple kill and stop the Baron buff from going over the G2.

Now with a 8K gold lead, Gamers 2 shove down the mid lane inhibitor, before moving around to destroy top lane inhibitor turret, but are unable to grab the inhibitor and hand then over a technical ace to Reason Gaming.

With super minions pounding on the last Nexus turret, Reason Gaming can’t use the lengthy spawn timers to achieve anything over than some breathing room, while G2 have now worked up to a 16k gold lead. Using this lead G2 bully their way into the base of RG, and their lead proves to be too much for Reason Gamings last engage, and they pick up the first win of the series. 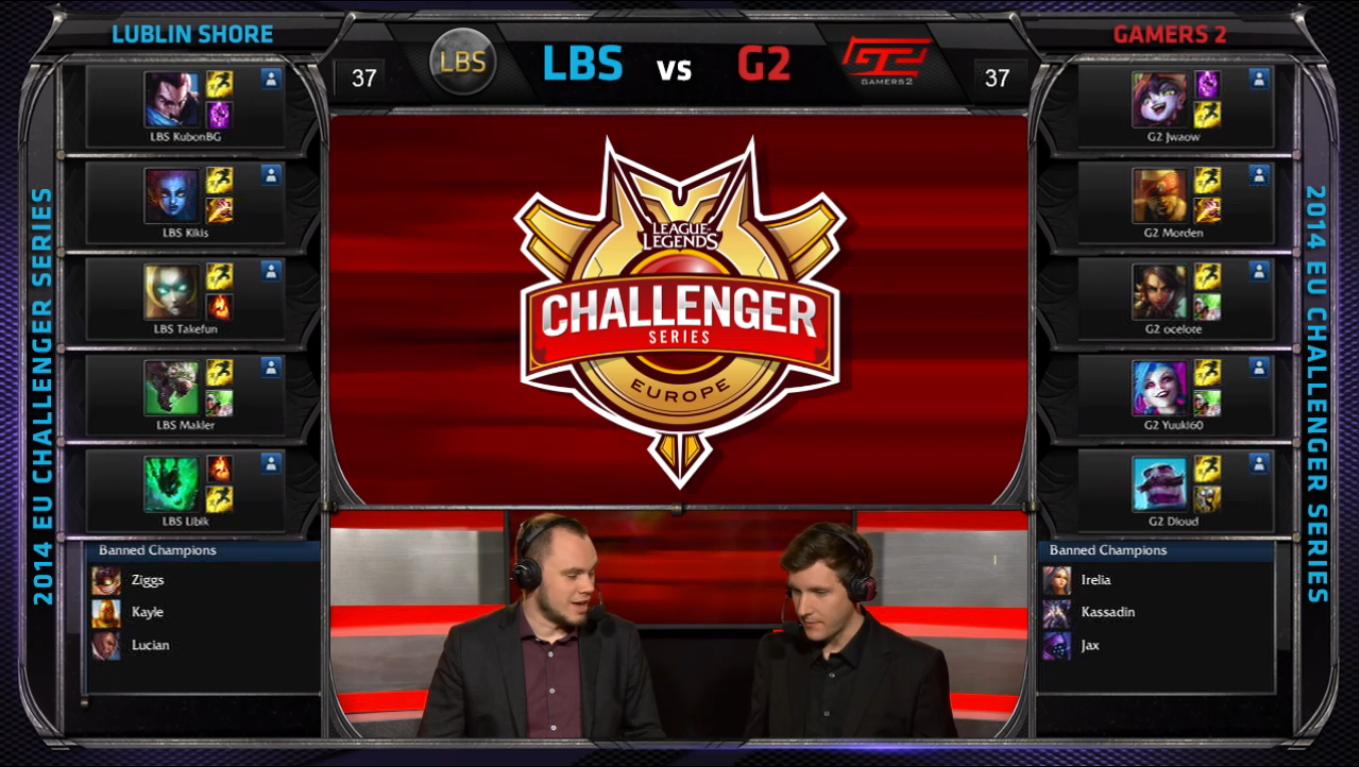 The second game looks to be a hard fight with both teams playing compositions that perfectly fit their playstyles. Unlike the previous match, this round begins with great early aggression from Kikis, who takes Gamers2’s Red buff without stepping over a ward. When Morden attempts to steal Kiki’s blue buff in return, Kubon and Takefun collapse onto him for a clean first blood. Both teams trade kills in mid and top lane until  RG take the first dragon of the game uncontested after killing Braum near the purple side blue buff.

The Red/Blue buffs have been a heavy focus for both teams, with almost no buff being secured uncontested, but Morden is caught out of range of anyone to safeguard too and gives up another kill. The first two Turrets are both taken by Gamers2 but despite this they are still slightly behind in gold, while they demonstrate how close this game is with a big teamfight at dragon resulting in 0 kills. Both teams return to base to heal up, and re engage outside of the dragon pit, where RG lose out on the dragon but pick up a kill onto Dioud as a consolation prize.

The game swings into Gamers2’s favour as Reason Gaming dive too deep in the top lane, without vision they give 3 kills over to G2, and they use this momentum to bully RG down the midlane, grabbing another kill onto Libik. Not letting this game spiral out of control Kikis flanks G2 in the bottom lane which leads to a great teamfight after they catch G2 off guard, winning the fight 3 for 1 and taking a Dragon to even up the gold. G2 even the gold with a 4-2 teamfight, before killing Makkler and Libik with ease. Gamers2 almost take an uncontested Baron, but RG’s key members manage to stop them, losing only Kubon. Gamers2 decide to recall, leaving the perfect opportunity for Reason to clear out the wards and sneak the Baron with just 4 members and close their cold deficit to only 1k, but a kill and a turret in mid gives them the lead. Wtih kikis soloing Dragon and Kubon pushing the top lane, G2 wisely take the opportunity to take down the mid inhibitor turret rather than try to contest. Kikis attempts a flank as Evelyn, but Mordens Dragon’s Rage sends him to the Gamers 2 backline to get melted, before they turn to the rest of Reason. After losing Makker its looks bleak for Reason, but a 3 man shockwave turns the fight to a 2 for 2. Gamers 2 get a pick onto Libik, and while they take the inhibitor 4vs5 Kikis flanks from the rear. G2 focus a lot onto killing Kikis, while a perfect combo from Oriana, Yasuo and Twitch’s ultimates picks up 3 kills allowing RG to take an inhibitor in return.

Gamers 2, starting to get desperate, attempt to take the baron, but a perfect collapse from RG with the combo being executed again wins them the game after a 4 for 0 trade, evening up the series to 1 – 1 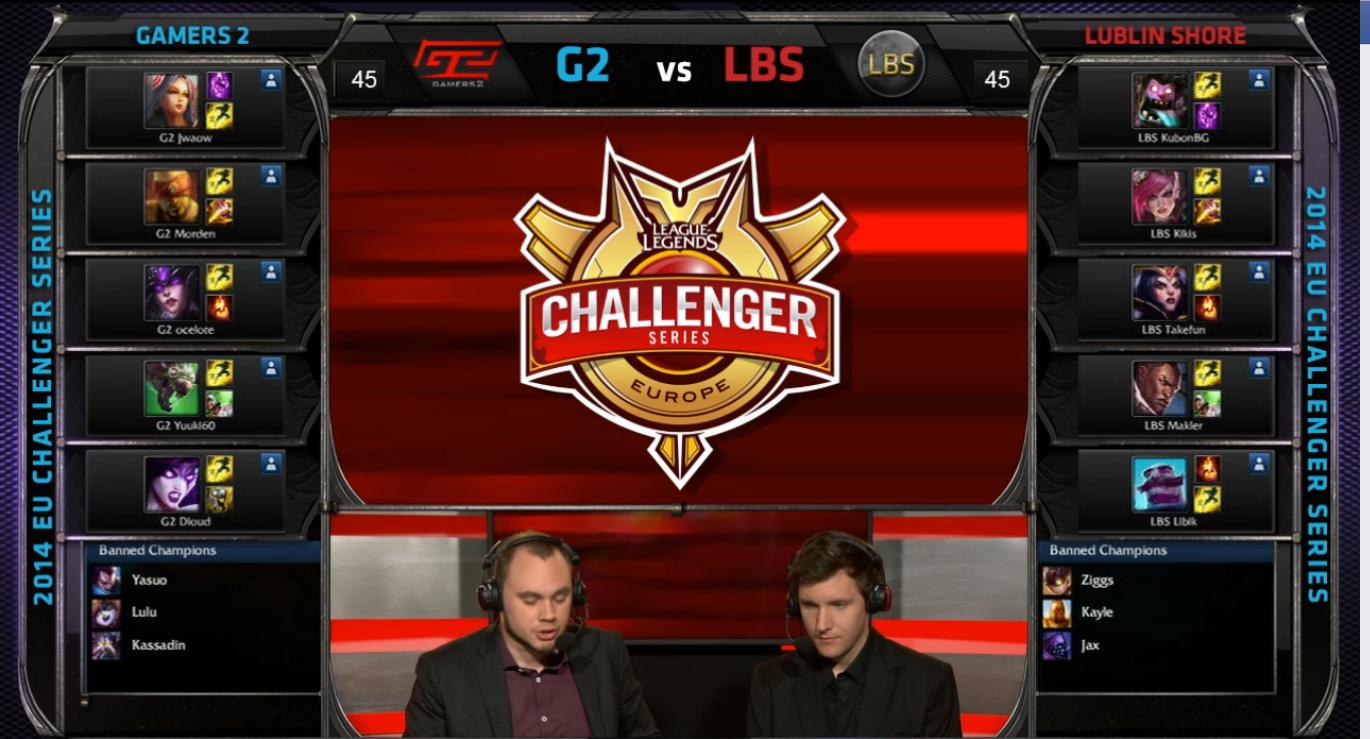 The game starts slowly with Morden attempting to counter-jungle at around the 4 minute mark, but backs away as he see’s Kikis with a level advantage. Using this Kikis is able to chase Lee Sin away and pick up a kill. Feeling confident Kikis stays in the midlane for a gank, but leaves it too long and Morden Arives for a counter-gank, and first blood goes over to G2, along with a second kill when Morden returns mid. Games 2 take the advantage with Morden making plays around the map. grabbing himself 4 kills, while Jwaow asserts Irelia’s mid game dominance with a solo kill onto Kubon.

Morden ganks the bottom lane, so Kubon teleports to try and counter, but it all goes awry and Reason Gaming lose 2 members and give up the Dragon. Gamers2 however become a little overconfident and give Reason Gaming 2 kills by overstaying their welcome after Dragon.

Kikis tries to initiate a sneaky gank by Vault Breaking over the Dragon wall into tribush, but lands straight on a ward between Irelia and Twitch. RG try and make a play in the top lane, but a collapse from G2 turns the trade into just a 1 for 1, though Reason take the advantage by destroying the Mid, and final, outer turret. G2 keep their gold lead by picking up a free dragon, before a flash-soul shackle from Dioud locks up RG resulting in Libik and Kiki’s death, while Reason manage to pick off Ocelote amidst the confusion, they lose both the Outer and Inner mid turret for their troubles.Gamers 2 take another turret which results in a 6k gold lead. Gamers2 stretch their advantage by taking objectives across the map, with a 3 for 1 trade providing them with the chance to take an inhibitor, which they take relatively uncontested. WIth an almost 10k Gold lead Gamers 2 are feeling brave as they go to take the freshly respawned Inhibitor, but RG successfully repel the assault, losing Kikis in exchange for taking down Ocelote and then grabbing a Dragon for some much needed gold. However G2 keep up the momentum, slaying Kikis and Makkler in the process of securing Baron, before taking down the Nexus and winning the game, and the Series.

Grand Final for the LoL team

SC2ITL: Another One Bites The Dust